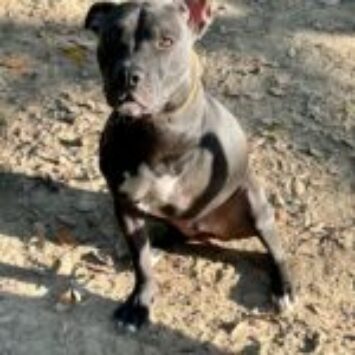 ARIES IS LOOKING FOR HIS FOREVER FAMILY! When Aries joined The Arrow Fund, his front leg was almost completely severed. The injury was several days old and due to the possibility of life-threatening sepsis and gangrene his leg was amputated. Aries has recovered from his physical injuries but continues to heal from the emotional trauma and has recently completed a professional training course. Being a tripod does not slow him down, he loves being outside, adventures and walks, meeting new dogs and playing but, he has short spurts of energy so settles down quicker than most pups. He also rides great in the car! Aries adores being with his people but is fine to take naps in his crate and sleeps will in there at night. Loud and rowdy children seem to scare him so he does best with older kids. He likes learning new things but does get overwhelmed at times so it’s best to take things slowly. Aries is currently about 10 months old and weighs approximately 40 pounds.